CML Blog: Crisis, Gender and the Politics of Time in the Medieval and Early Modern Periods

On 5th-6th November 2019 the Symposium Crisis, Gender and the Politics of Time in the Medieval and Early Modern Periods took place in Odense, at the Convent of Noble Maidens. The Symposium, organized by Aglae Pizzone, Senior Researcher at the Center for Medieval Literature, aimed to analyze the multifaceted but barely explored nexus between gender and time within a wide range of medieval and early modern sources. Speakers have been asked to consider the impact of different temporal patterns, especially in case of a crisis (conceived of as a moment of transition both socio-historical and individual), on the construction of gender as it is reflected in literary and historical sources. The interest in a thorough investigation of the relationship between time and gender springs from the need to stress the relevance of temporality as an important factor in understanding women’s agency: while the connection to space has often attracted considerable interest, the impact of different temporal patterns on how gender has been construed and perceived still deserves to be considered.

The two-day Symposium saw the participation of many scholars from all over Europe. The first session was opened by Diane Watt, from University of Surrey, who gave a keynote lecture on (Re)writing Women’s History at Wilton Abbey, focusing on the period immediately after the conquest. Taking her cue from the literary experience of Goscelin of St. Bertin, she showed how the voice of the male hagiographer, with his focus on matrilineage and the gendering of authority, both overwrites and takes advantage of the female historiographical tradition, thus impinging on the linearity of time.
The first paper by Lorenz Hindrichsen was titled Chaucer's Wife of Bath: Iconoclast, Chronoclast. Lorenz focused on The Wife of Bath’s Prologue to investigate the many levels of gendered temporalities within the narrative. The agency of the woman as a main character of the story represents a resistance against a controlling and male-dominated temporality as well as against a normative femininity. Zoë Enstone delivered the second paper of the session, titled Morgan le Fay, Nymue and the ravages of time: women readers and subversion in Malory’s Morte Darthur. Exploring the differences in the literary representation of two female characters, Morgan le Fay and Nymue, Zoë emphasized the complex relationship between gender and power within Malory’s work and against the wider context of Arthurian narratives.

The second and last day of the Symposium was opened by a second keynote lecture by Shaun Tougher, from Cardiff University. He spoke about Time and the Macedonians: Dynastic Crisis and Gender in Byzantium. He looked at the historical arc of the Byzantine Macedonian Dynasty to shed light on the lasting power of dynastic temporality in shaping narratives of crisis, with a focus on Michael Psellos’ Chronography. The first session consisted of two papers. My presentation, The End that Never Came. On the Relationship between Time and Gender in Some Byzantine Hagiographical Texts, considered the nexus between time and the construction of female holiness in some Byzantine hagiographical texts. Analyzing the long trajectory of literary representation of Christian women saints from the second to the tenth century, I explored the relationship between gender and changing temporal patterns. The second paper by Emilia Olechnowicz, “I am Richard II”: The Elizabethan Transgression of Time and Gender, analyzed the strategy of self-presentation by Queen Elizabeth I against the background of the theory of the king’s two bodies codified by Edmund Plowden. By presenting herself both as a female natural body and a male immortal politic body, Queen Elizabeth’s self-representation produces a transgression of a linear temporal pattern. The second and last session of the Symposium saw the participation of Kristine Johanson, Sarah Lewis and Ana Rita Gonçalves Soares. In her paper, ‘I've all the world in thee’: Emotion, Time, and the Making of New Political States in Katherine Philips’ Poetry, Kristine Johanson explored the significance and efficacy of emotion in constructing alternative temporalities in Philips’ poetry. She attended to several of Philips’ friendship poems to demonstrate how these new notions of time are dependent on gender-determined experiences. With a paper on Prodigal Husbands and Crises of Maturation, Sarah Lewis reflected on how social identities and discrepancies between men and women have been defined through different attributions of temporality. More specifically, she emphasized the role of the prodigal son as a temporally subversive character. With the last presentation of this final session, Queer Temporality. Disrupting Linear Time in Medievalist Spanish Literature, Ana Rita Gonçalves Soares considered two contemporary Spanish novels: Paloma Díaz-Mas’ El rapto del Santo Grial and Rosa Montero’s Historia del rey transparente. With a focus on Carolyn Dinshaw’s notion of a “queer touch across time”, she stressed how in these two novels chronological narrative is broken within a tendency to conceive past and present not as completely distant and distinct. 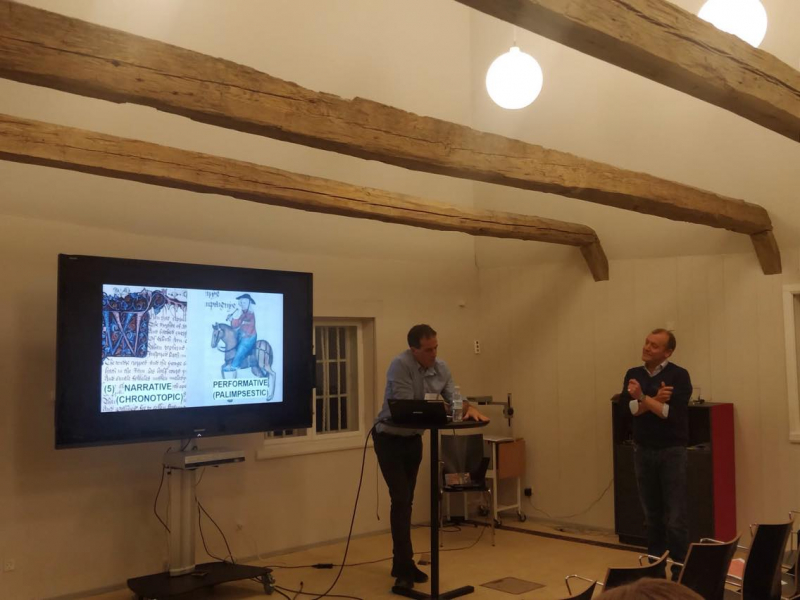 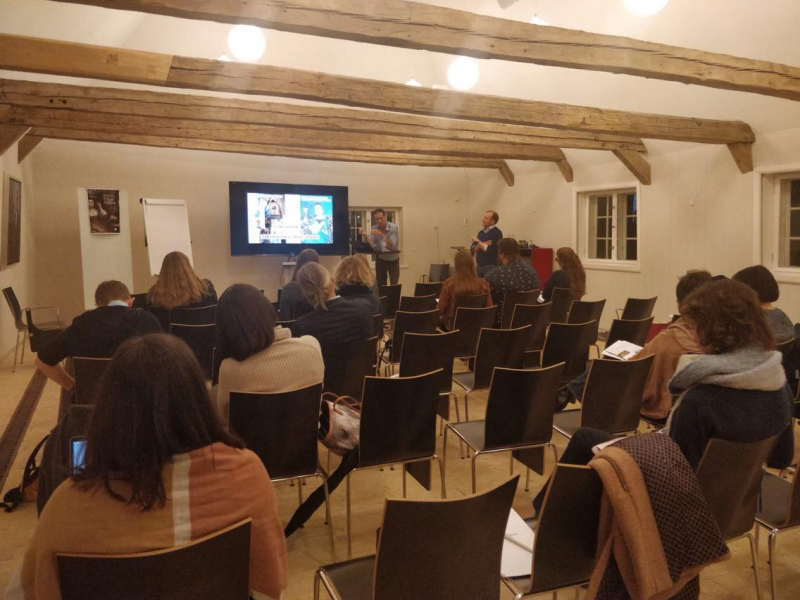 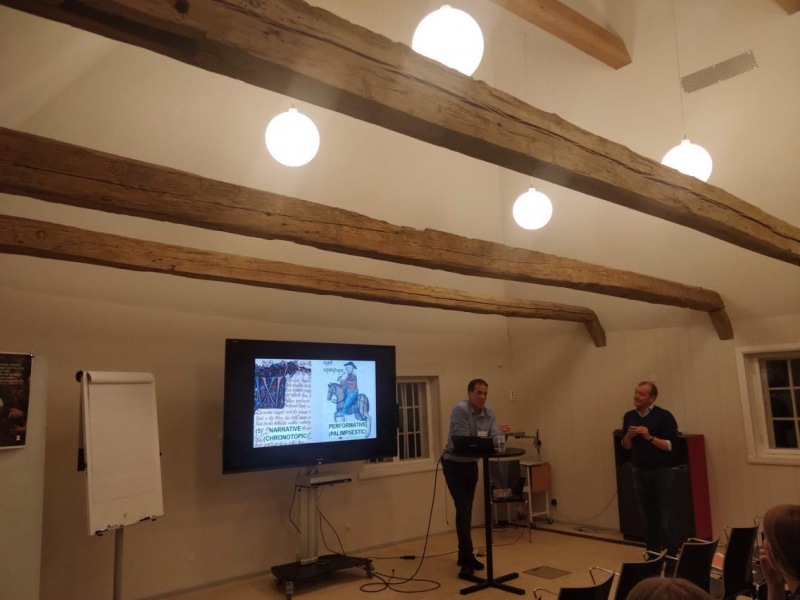 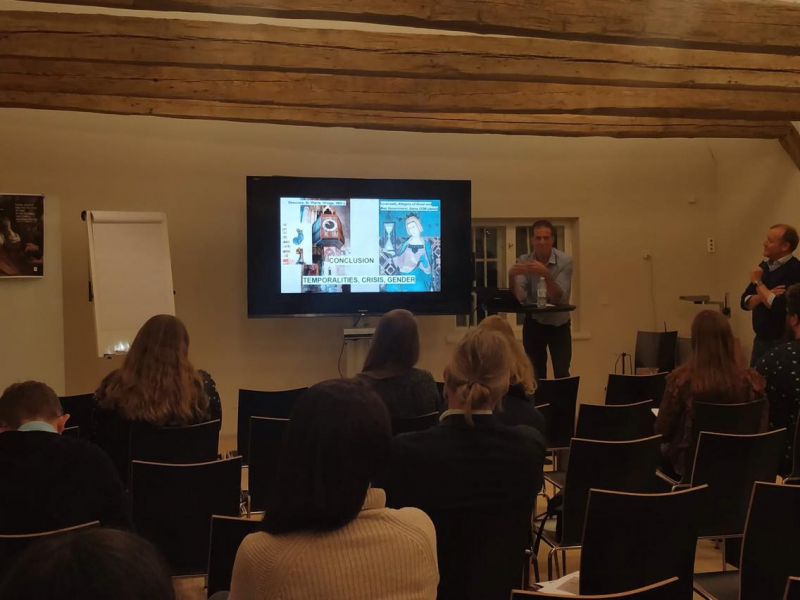