Ten students from around the globe, trained by Professor Alexandros Alexakis (University of Ioannina) and Professor Stratis Papaioannou (University of Crete), explored medieval Greek, paleography, and Byzantine book culture. I had the pleasure to be part of this wonderful team, thus having a great opportunity to spend a stimulating month by studying late antique and medieval Greek texts.

Since the course was virtually attended by participants living in different countries – from US to Russia – some woke up very early in the morning and joined the videoconference drinking a big cup of coffee, while others joined in the evening. Although the Summer School could not take place in person, the environment was very friendly, and we were strongly motivated not to lose the ‘social’ dimension; therefore, we organized virtual happy hours to get better acquainted!

The Summer School consisted of daily sessions (2 hours each) where we analyzed a variety of different texts selected on the basis of linguistic registers, literary genres, and cultural contexts. Thus we attended online lectures, and in addition we had to translate Greek texts in their original version. We read texts written in high-style Atticizing Greek, such as those composed by Gregory of Nazianzos, John Chrysostom, and Michael Psellos. We also translated texts written both in Byzantine Koinē, such as Synaxarion of Constantinople, and in linguistic idioms closer to the spoken vernacular Greek, such as Miracles of Saint George and Digenis Akritas.

The program provided an introduction to the history of Byzantine literature and an eight hours training in Greek paleography, through which we have been introduced to the history of Greek book-scripts during the Byzantine period. We have been trained to read a variety of majuscule and minuscule styles and we also prepared transcriptions from medieval manuscripts, which were discussed by our group then. Comfortably seated at our own desk, we had the great chance to access to several Byzantine manuscripts of the rich digital collections of Dumbarton Oaks, as well as to digital manuscripts preserved in other libraries all around the world.

Finally, for one hour weekly, each of us had a private tutorial devoted to the reading of a text of our own choice – and, obviously, I chose to read John Tzetzes! I am grateful to Dumbarton Oaks and, in particular, to professor Stratis Papaioannou - who assisted me during our individual tutorials - for giving me the opportunity to work in depth on my doctoral project, thus receiving useful advice on how to properly address and investigate relevant aspects of my research project.

It was a very enlightening experience, which I fully recommend. The Summer School allowed me to enrich and expand my knowledge of Byzantine Greek. Being an extremely rewarding experience, I strongly encourage any student interested in Byzantine and Medieval studies to apply for the next competition in 2021, which will be in Athens!
Virtual Dumbarton Oaks had been the perfect environment of our Byzantine Greek Summer School, but we remain hopeful that one day we will meet in person on a bench in its real beautiful garden!

Here a little glimpse of my work environment during this summer: 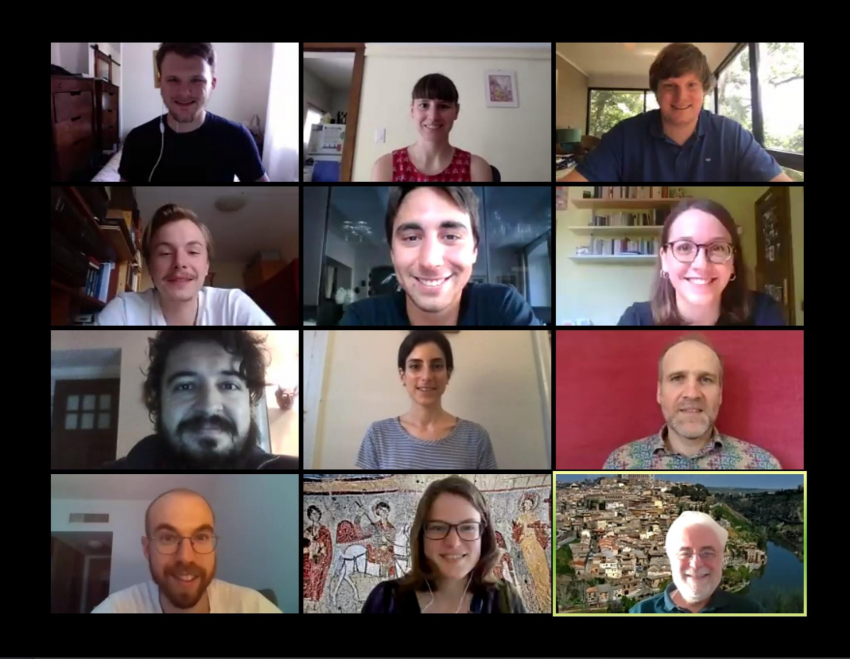